Diving Blue is the most sought after dive site in the Pacific island nation of Palau. Blue Corner is an advanced dive marked by very strong and sudden currents and those with weak hearts are strictly advised not to engage in exploring Blue Corner. Moreover, these conditions at Diving Blue make this ridge that protrudes out into the open sea and drops down to thousands of feet, an ideal roaming ground for sharks. 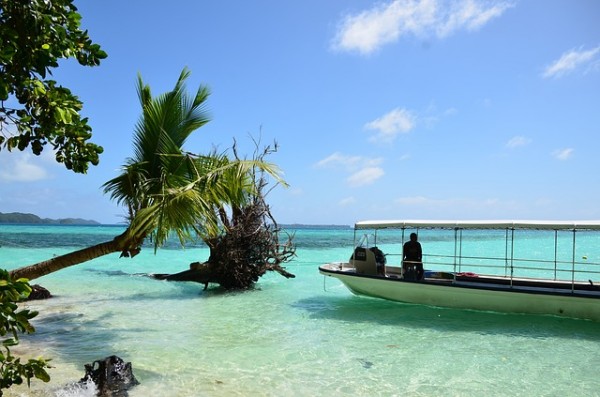 The diving activities at Diving Blue take place along either side of the wall, depending on the water currents. Divers can drop to about 90 feet underwater to witness the spectacular gorgonian fans, anemones, eels and soft corals clinging along the wall. Encounter with a gray reef shark is also a possibility here and it is always advisable to keep a distance with them.

As one moves more toward the coral shelf that drops down at around 35-60 feet depending on the side one is actually on, one can even witness more soft corals. At this point the water current gets stronger and more and more sharks are found cruising overhead. A little bit of unpreparedness can make one being pushed by the current to the other side of the wall. So it is always better to keep yourself tied with reef hook. Te strong current also carries the smaller organisms that are consumed by the smaller fish and which in turn is again devoured by the bigger fishes and the latter by even bigger predators, hence completing the food chain.

By keeping the body hooked with the wall, one can effortlessly float with the current. The sharks and other marine lives like jacks and black snappers too approach if one stays calm and quiet. However, this tranquility can be disrupted at any moment by sudden rush of events and any diver, who has been caught relaxing for that small second, can miss a lot including to capture some of the most breathtaking marine excitement in camera.

The fun continues further in the sandy channels that pass through the shelf. A one unties himself from the hook, he/she will be drifted back and the current will subside. Here, in the hard coral shelf, one would be left glued to the view of several fish species including manta rays, eagle rays, Napoleon wrass, triggerfish, Large Dogtooth tuna, Clown Triggers, barracuda and butterfly fishes and Moorish Idols and lobsters, shrimps, turtles and octopuses. However, it could be risky to approach the King Triggers, for they, in an attempt to safeguard their own territory, would drive the divers away. Whitetip sharks can also be found sleeping on the bottom of the sandy pathway. While passing the coral ridge into the open ocean, encounters with schools of barracuda is not unlikely.

Blue Corner is indeed a dive that offers a new experience in each trip and any diver who really cherishes to be a witness of the marvelous marine ecology, would not relent but come here time and again.