Raja Ampat is an Indonesian archipelago in the west Papua province. The main islands here are misool , salawati , batanta and waigeo. The smaller island here is kofiau. Surrounding these there are one thousand and five hundred smaller islands along with cays, and shoals and other such elements.

The entire archipelago structure occupies around forty thousand square kilometers of land and sea together. The largest marine park in Indonesia is Cenderawasih bay. Part of the irian jaya province which has a new name West Papua. 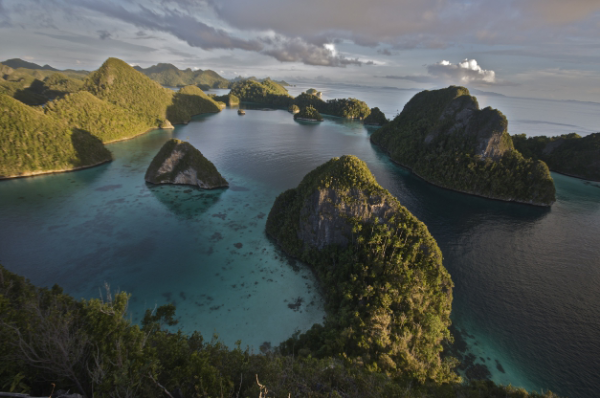 These islands incidentally turn out be the northern most of continental Australia.

Raja Ampat has the highest recorded marine life diversity compared to anywhere else in the world, so says the organization – conservation international.

The coral triangle consists of Philippines, Indonesia and Papua New Guinea. And in this triangle samples were taken from all over to see which place has the most density. Raja Ampat showed the highest content.

In fact the coral triangle is the heart of the entire world’s coral reef bio diversity. Which means that the raja ampat coral reef system may be the richest in the whole world. 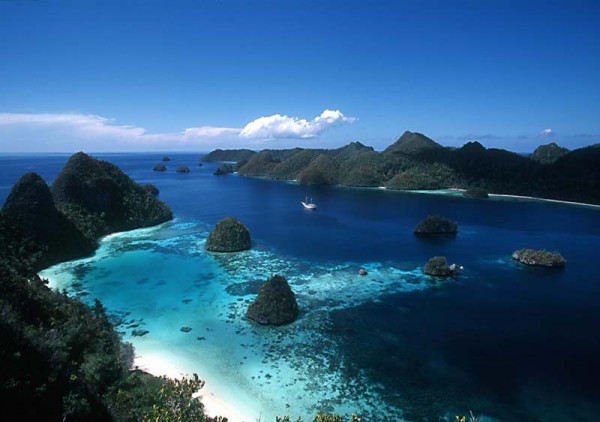 Because of the relatively high sea water temperature, the waters here maintain a nice and stable temperature system which also means that the coral reefs are more resistant to threats like coral bleaching and other coral diseases.

Unfortunately, coral diseases and coral bleaching is responsible for many of the coral life all around the world to grow weak and die. Raja ampat is otherwise also quite far way from the reach of urban society. And hence this place is mostly remote and undisturbed.

Now because of its rich marine fauna, raja Ampat is strongly influenced by its position that lies between the Indian Ocean and the Pacific Ocean. Since coral and fish, deposit their larva which gets shared easily between the two oceans. The government along with renowned scientists around the world have made raja Ampat; a part of the global priority for marine protection.

In fact the variety of marine life is quite staggering.

There are many areas here that boast of enormous schools of fishes. Sharks have also been spotted here.

Along with all these, there are marine activities like snorkeling , scuba diving, water jet skiing etc.

The high slopes that come down from uranie which go deep, along with the cliffs of wayag , the nutrient rich waters of mayabilit, the blue water mangrove, the up swelling areas of missol and the dampier strait . These are just some of the many places that serve as home for the assembly and breeding of various species. When all these are put together, they make up a highly impressive list of species that can ever be complied from a coral reef system of this size.

Because of all these factors, marine tourism is prospering at a very high level. And the tourism industry has become sustainable and making efforts to abolish bad practices such as over fishing, cyanide fishing, mining and logging. These usually destroy most of the coral life which results in the marine life getting affecting and in some instances even dying. . The tourism industry has promised to make spectacular changes to the regions underwater realm so the marine life and the local people living here have a better community.

Even websites have been made so that people can educate themselves against these kinds of practices. The main purpose of these websites is to play a bigger part in the sustaining and conservation of these amazing islands.