A complete circuit of the Paine Massif in Paine National Park in the Chilean Patagonia is a strenuous trek. The trek moves through mountains, glacial side valleys and magnificent rock towers, the Patagonian Ice Cap and glaciers leading to windy lakes. The weather here is utterly unpredictable with rain, sun and wind making alternative appearance. November through March is the best time to visit the place. 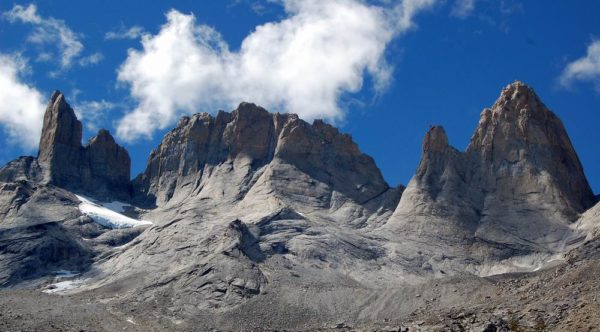 From a trekker’s diary:

The inaugural view of the Paine Mastiff from the vast Patagonian steppe looks almost unreal. The weather was absolutely clear and that helped us to spot each of the famous peaks of the mountain ranges: Paine Grande to the left and the three towers including Torres del Paine, Los Cuernos to the right and the Patagonian Ice Cap.

As we trekked further into the national park, we met a huge herd of guanacos or wild llamas as well as newborn calves, known as ‘chulencos’.

After we reached our first campsite, we prepared for the hiking to Torres del Paine, one of the trekking trip’s longest. We moved along Rio Ascencio into Valle Ascencio, crossed beech forests and rocks and boulders to a place from where one gets a spectacular view of the tall towers and the glacial lake located at their feet.

Today it was not a clear and sunny day although we enjoyed the fantastic views of the peaks for some time before the gathering clouds in the sky burst open, blurring the view of the towers in the process.

On the third day, our team reached Logo Paine, another fabulous campsite. The area is absolutely deserted. The tents were erected behind higher elevations to protect the strong wind that sweeps over the pampas.

The next morning when we got up, it was still windy. I decided to stay back at the camp and enjoy the beautiful surrounding. The turquoise lake, the blue sky, the white mountains, green grass and colourful wildflowers, it was absolutely amazing to stay amidst the colourful concert.

The next day, we hiked through the forest although the misty weather did not allow us much to get glimpse of Escudo Cabeza del Indio or Indian Head Peak. That night we had a gala campfire.

Most trekkers who try Paine Circuit follow a loop called ‘W’ that passes through the heart of the national park in order to view the three famous vistas like Torres del Paine, Los Cuernos and Glaciar Grey. We also followed the loop and enroute the vistas, witnessed Glaciar de Los Perros and its adjacent lake.

It was the day of the longest trek. We started toward Paine Pass (at a height of 4,000 feet). We crossed a marshy land and then began to climb a steep ascent on a difficult rocky trail and snow. Finally, we got view of the Patagonia Ice Cap and the 25-mile-long Glaciar Grey.

Starting five-hour trek to the viewpoint of Valle del Francés. The last part of the trek was along Lago Nordenskjold.