Whistler was originally supposed to participate in the bid to host 1968 Winter Olympics though it did not materialize ultimately. However, the preparations had started in 1966 and by the 1980s and 90s, Whistler emerged into an extensive resort. Whistler’s bid to host the winter Olympics succeeded in 2003 when it, along with Vancouver, was selected as the proud hosts of the 2010 Winter Olympics. Whistler Blackcomb hosted alpine skiing events, including the men’s and women’s Olympic and Paralympic alpine skiing events, giant slalom, super combined and slalom.

Re-named Whistler Mountain in 1965, the vehicle-free village centre was developed on the site of an old garbage tip. Today, Whistler is a sprawling village, dominated in the Upper Village by the splendid Fairmont Chateau Whistler hotel as well as some spectacular skiing trails.

Whistler Village is situated at the base of the Whistler Mountain Village Gondola and Blackcomb Excalibur Gondola. The Village has all kinds of facilities required for sustaining tourism. The Village is about 137 km from Vancouver International Airport.

Whistler is marked by a low elevation of about 675 metres, which subjects it considerable amount of rainfall, which sometimes spoils the fun of skiing somehow. Nevertheless, keen skiers and boarders at Whistler care little to let their spirit subdue.

Whistler and Blackcomb mountains are quite similar in nature. Each has over 100 trails, many of which pass through pine forests. Whistler has more number of bowls (Whistler, Symphony, Glacier, Harmony and West Bowls) while Blackcomb has more glaciers, namely, Blackcomb and Horstman and couloirs, like, Couloir Extreme and Pakalolo. 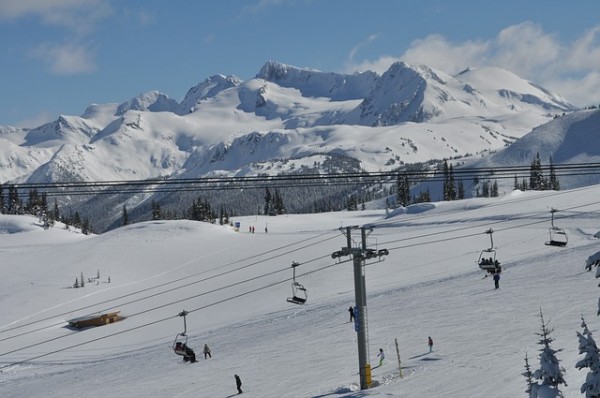 Previously, Whistler and Blackcomb had two separate ski areas that were integrated into one in the late 1990s. Ticketing, access control systems and pass for the two ski areas were also fully integrated in 2003.

Whistler and Blackcomb Mountains are mainly accessed through three gondolas, namely, Blackcomb Excalibur Gondola and Whistler Mountain Village Gondola (both located in the Village) and the Whistler Creekside Gondola (located to the south in the Creekside area). The primary skiing terrain here begins slightly higher, at about one-third up the mountains. Ski-outs to the valley usually take place during the months of December through April. The mid and upper level areas are served by 10 high-speed detachable chairs and 5 fixed-grip lifts. Four T-bars link the Horstman Glacier and the Whistler alpine regions. They also take the skiers to the entrance to Blackcomb Glacier. The overall lift capacity at Whistler (at 65,507 skiers per hour) is the greatest in North America.