Mark Twain attributed nicknames to just about every destination he clapped eyes upon, yet few could be as fitting as “Little Grand Canyon”. Bestowed upon one of Hawaii’s most visually gratifying natural landscapes, the epithet stems from Waimea Canyon’s deep reddish tinge and column-like formations – both reminiscent of America’s own famous natural wonder.

Bounded by 1,900 acres of protected ancient parkland, the “Grand Canyon of the Pacific” spans a ten-mile stretch along the West coast of Kauai, taking in some of the most arid and desolate volcanic landscapes to be found along the Hawaiian island chain. Kauai itself sits atop an ancient volcano, which in turn has shaped much of the island landscape. Waimea Canyon, however, was formed not by white-hot lava flow, but by the Waimea River; an ancient watercourse made famous by the landing of Captain Cook in 1778. The Waimea River concludes at the Western Pacific estuary, just a few short miles from Waimea State National Park. Popular with both surf enthusiasts and white-water rafting fanatics, it’s an area that, until recently, remained relatively untrodden by tourists and holidaymakers. 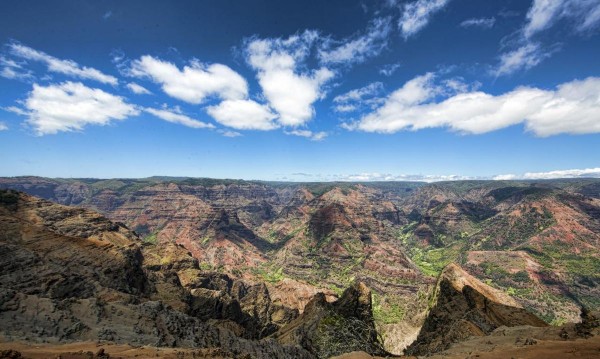 Modernly, Waimea Canyon is viewed as a place for adventure holidays and extreme hiking breaks, in part due to the many isolated points of interest to be found within the protected reserve. Densely carpeted by lush eucalyptus forests and yellow ginger, Waimea Canyon is not as arid as some might believe. Coco Palms Grove constitutes just one of the many grotto-like oases to be found along the canyon floor. A backdrop of scarlet-tinged, stepped cliffs offset the foaming whiteness of the thunderous Opaekaa Falls, which, from a distance, seem to wind like a ribbon up the 900 meter cliff-face.

Following its use as a filming location for Steven Spielberg’s “Jurassic Park” (1993), the South-Western Hanapepe Valley continues to draw visitors in their droves. Little exists by way of concrete attractions, however, the untamed beauty of the area, coupled with the proliferation of straight-drop waterfalls has made it popular among abseiling groups and energetic climbers. Located some 1,000 feet above the canyon floor, Hanapepe Lookout affords spectacular panoramic views across uncultivated landscapes, with little else obscuring the horizon – save for the glistening sea.

Driving is by far the easiest way to explore Waimea Canyon National State Park. Visitors descend upon the island via Lihue, a small, yet charming town located on the East shore of Kauai. From here, it’s possible to hire a rental car for anywhere up to a fortnight and venture forth into the untamed territory of the State Park. Although one of the farthest natural wonders in terms of driving proximity, Spouting Horn (on the far West Coast) remains one of the most visited. A natural phenomenon caused by seawater gushing beneath a lava shelf and bursting forth via a small surface opening, Spouting Horn is particularly impressive at sunset. Tidal variation causes the phenomenon to burst upward more violently at dusk, often spouting water in excess of 50 feet. Sparkling prisms of light bathe the area in glittering diamonds of color, making it Kauai’s second most popular natural light-show, after the efforts of Mount Klauea.